Last years Healthspan GBG night ride featured a contraption of 4 mountain bikes welded together with pig iron. It was a promotional vehicle that Adventure cycles used for fun events. However on the nation hill climb “Val De terres” the bike handled badly and it was deemed too dangerous to keep using.  In the mean time I had been in a hit and run and could not ride. So if I wasn’t riding maybe  I could take on a bigger build. So Adventure Cycles commissioned me to build a Quadra cycle called the dominator. I have only build regular frame and have neve built a tandem let a long a quadra cycle.

I started with a sketch and some rough dimensions.  Using Columbus Gara large dimension Cromo tubes and regular MTB parts apart from tandem cranks. The trick is to make it a small as possible but stable and fit everyone on without hitting toes or heals. 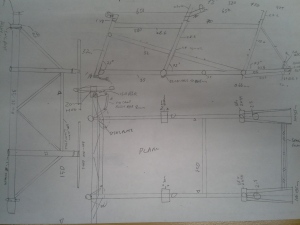 I got all the metal from peter at Framebuiliding.com he must have wonders what on earth I was building. Then I started building the backends. Bending tubes to be as similar as I can.

Putting the backend together. 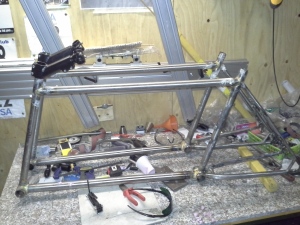 It was a bit tight on space and my flat surface makes it tight to fit it all on and get it straight. So I built two strange looking back ends as the stoker stem comes backwards to ensure the back rides head is not up any ones backside.

After hours of fillet brazing But eventually I built one side.

One I had two sides it started getting tricky as I had to alight the front end on the flat work surface and then a big supported steel bar through the rear end. I nearly burnt myself a few times moving round the cumbersome space frame while fillet brazing. 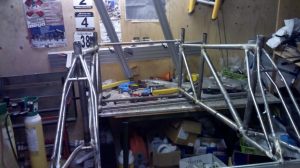 What I had not factored in was how long it would take me to finish by hand so many fillet joins. Hours and hours. But finally it was ready to paint. The big problem was I can’t spray something that big in my shed. So I had to wait for a still day outside and hope there was not dust (there were a couple of bugs though)

I got it to the guys at the bike shop and they built the wheels and fitted the kit in a day and it was ready to go. Crazy they did the rock to rock ride that weekend. Reports back was that it was a huge improvement and with a few mods would be amazing. So I was really pleased. I think I might stick to a regular 29er build next time.